Learning from the Elite: Acceptance Speeches at the Golden Globes

Last night’s Golden Globes was not just about fashion, A-list celebrities (hello Matt Damon!) or box office hits. This year’s show was a communications lesson in acceptance speeches at the Golden Globes. It was also a reality check for the masses – to know that even those in the spotlight are not perfect public speakers. There is no denying that Sunday night’s show was highly entertaining, but it is important to take away the lessons learned when public speaking. Whether that be communicating to the media, your customers or your peers, we can learn a lot from these champagne-filled elite. According to executive communications coach Mary Civiello, here are three tips:

Jacqueline Bisset was downright disoriented in her acceptance speech for Best Supporting Actress. The 69-year-old British actress showed us how awful it can be when you fail to prepare. No excuses, even if you think your chances of reaching the stage are remote. Here’s how this translates to communications: Don’t assume you’ll have no role to play in an upcoming meeting. Be ready to be called on. Every meeting, including social events, merits some degree of prep work.

Jennifer Lawrence also seemed surprised to win the Best Supporting Actress award in the film category, for American Hustle. But unlike Bisset, she pulled herself together to give one of the acceptance speeches at the Golden Globes. The 23-year-old Lawrence graciously pointed out the more seasoned actors she was up against. As she named them, the cameras focused on Helen Mirren, who appeared sanguine, and then Jessica Lange, who looked sour. Lange could be compared to corporate presenters who look uninterested as a team partner speaks. They’re either bored and/or assume that no one is looking at them. Better to model Ms. Mirren. You are always on stage.

Make the most of your spotlight

Every year at award shows, stars get up, one after another, and struggle to remember everyone who has had something to do with bringing them into the world and making them famous–while few in the audience know or care about the people they mention. These “winners” can’t win. They inevitably forget someone important. They also miss opportunity. Better to do as Bono did: He and his band, U2, won a Globe for Ordinary Love, the song they wrote for Mandela: Long Walk to Freedom. In his speech, Bono worked on persuading people to want to see the movie.

Too many presenters waste time on the minor details—a sure snooze that typically comes at the start of a presentation when capturing attention is most critical. Instead, park that unless it’s sure to make me want to buy what you’re selling.

What other takeaways did you gain from this year’s Golden Globes? For me, I learned that Jennifer Lawrence can do no wrong with Dior. I also learned that being on Tina Fey and Amy Poehler’s bad side will never end in your favor (sorry Taylor Swift!). And last but not least… Matt Damon only gets better with age! 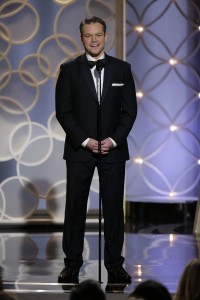