International Woman’s Day has come and gone, and we’re approaching the end of Women’s History Month. Over the last few weeks companies and brands throughout the country and world have been celebrating women. Using a variety of strategies, many businesses utilized International Women’s Day and Women’s History Month to announce ongoing initiatives, campaigns or a commitment to a gender-related cause.

From paper towels to financial investors, here’s a quick review of a few creative favorites:

The same company that launched the #LikeAGirl campaign during the Olympics last summer kicked off a campaign called #WeSeeEqual. The video depicts women and girls conquering their fears, loving on their families and achieving their goals.

Western Union released the results of a global survey that found women across the globe believed education to be the key to advancing gender equality. Citing the survey, Western Union announced new education initiatives targeting girls on International Women’s Day, including a new global scholarship program.

The paper towel brand known for plaid and biceps produced a series of mini-videos about strong women. The move accompanied the announcement of a campaign called #StrengthHasNoGender. The Brawny website revealed its commitment to contributing $75,000 for STEM education programs to Girls Inc, a nonprofit that helps girls grow up to be healthy, educated and independent. They also created a timeline of important events impacting women throughout history.

This viral sculpture installation is now seeing requests to have a permanent residence on Wall Street. The Boston Globe reported that the fearless girl was commissioned and placed by Street Global Advisors as part of their initiative to encourage their investors to increase the number of women in leadership roles. SSGA’s official press release referred to the statue as “a Symbol of Need for Action”. 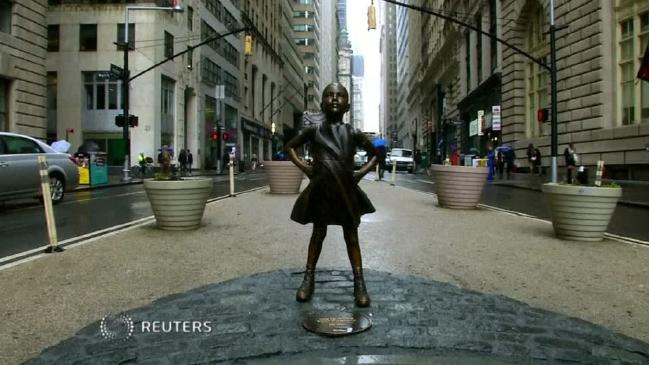 These campaigns are eye-catching and inspiring reminders that while there is still work to be done for girls and women, there is ample support behind ongoing efforts. While the month of March shouldn’t be the only time businesses evaluate their commitment to supporting women, it provides an opportunity to share stories of successful women and reminds us they’re all around us.