I love when TV does good.

On Monday morning (11/11/13) Amy Robach of ‘Good Morning America’ shared her breast cancer diagnosis and treatment choice with viewers. It was a diagnosis she got after receiving an on-air mammogram in early October. 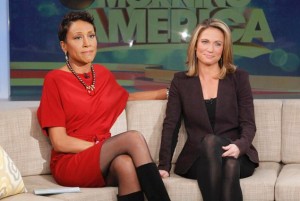 The mother of two shared her breast cancer diagnosis on GMA, alongside cancer survivor and colleague Robin Roberts.

Her choice is to treat the cancer aggressively, opting for a double mastectomy. Details  on Amy Robach’s breast cancer are limited (she doesn’t yet know what stage or if the cancer has spread) but the 40-year-old Robach shared what she knew with Robin Roberts, herself a cancer survivor.

As Robach said, “I would have considered it virtually impossible that I would have cancer.” It’s a sentiment I would guess is shared by most people fighting the battle against cancer. It was this mentality that made it easy for Robach to postpone a mammogram, a procedure she only completed as part of a GMA assignment. An assignment she claims she actually resisted. 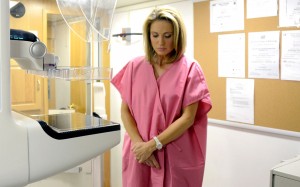 The 40-year-old underwent a mammogram live on air in October for GMA.

Robach is now part of a strong team of women in media and entertainment that have made their cancer diagnosis part of their public persona. In addition to her GMA colleague Roberts, Robach can seek the wisdom of E!’s Giuliana Rancic, musician Sheryl Crow, and even Angelina Jolie. It’s not a club anyone would chose to be in, but I’m proud of these women for sharing their stories and using their platforms for good.