There is nothing more uncomfortable than watching bad improv comedy. Except perhaps watching someone crash and burn while pitching ideas during a business presentation. Especially if that person is you.

As written up by Fast Co’s Joe Berkowitz, master improvisational comic Jason Mantzoukas has developed seven tips for avoid comedic, or boardroom, failure. In a presentation, success depends on our ability to have others see our vision and to making audiences believe in your point of view. Here are Jason’s hard-learned tips for doing just that the next time you take the stage:

Switch up your pitch

It shows when you’re just selling the same bill of goods over and over. Customizing for each individual audience helps forge a connection.

“Everybody pitches differently,” Mantzoukas says. “The way I’ve kind of settled into it, which I like and works well for me, is I loosely prepare what I want to do, what the show—let’s say it’s a TV show—what the show is. Kind of the macro conversation. Mostly what I want to do when I go into a room is I want to talk to that person and have that individual conversation, so that for that meeting, that is the version of the pitch that exists. One singular version that is just me and that particular room of executives. ”

Be agile and read the room

It’s not enough to merely prepare original pitching ideas for each situation; you have to also have the spontaneity and flexibility to respond to what happens once your idea starts landing.

“It’s a very improvisational process,” Mantzoukas says. “Even though I know loosely what I want to talk about, I let the people’s responses dictate how I proceed. So if I start talking about a show, and I’m saying, you know, It’s a modern-western! It’s like a Deadwood or something, and the person’s like, ‘Oh I love Deadwood,’ then the show is definitely like Deadwood. Good friends of mine, they write their pitch out word for word and read it off of paper, so they can really get out exactly what their vision is. But if you were to accompany me to five pitches, you might hear what sounds like five different versions of the show I want to make, because it’s malleable. A lot of it is reading the room when you’re pitching—what are people giving you?—because that stuff’s important.”

Don’t just listen to your audience’s feedback; incorporate it in your pitching ideas.

“When people contribute,whatever I’m getting from the person is what I’m gonna keep pursuing or walk away from,” Mantzoukas says. “But ideally what I’m pitching is an idea and characters, and how it lives in the future has yet to be fully determined. More than anything I want, when I walk out of that room, I want people to feel like we together just had this great meeting where we talked about this show that we’re all excited about. Rather than, ‘Oh, I just heard someone talk about something at me.’ I want it to have been more of a ‘with me’ conversation. 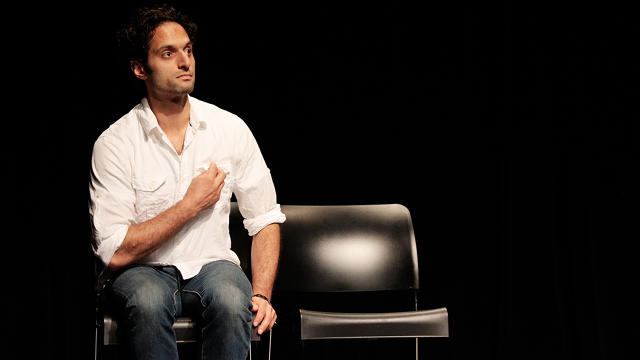 If it seems like you’ve lost them, acknowledge it

Anybody can invoke an attention span snag, but not everybody has the wherewithal to rise above it and when the audience has checked out.

“Sometimes the audience just checks out in improv shows, and sometimes that happens in meetings too,” Mantzoukas says. “I’ve been in meetings where someone has just pulled their Blackberry out and checked it. And then it’s like, ‘Oh, shit, this is not going well.’ I’m somebody who will call it out, the same way that one time when someone fell asleep in the front row of a show I was doing, I stopped the show so that we could all go and take a picture with the sleeping person. So I will call it out, in a way to be like, maybe I’ve gotten off-track, let me dial back in to what we should be talking about.”

If an idea needs more explanation, bring proof of concept

In the early 2000s, Mantzoukas had done a stage show with then-comedy partner Jessica St. Clair, called ‘I Will Not Apologize.’ It became so popular that they both got agents and managers from it, and soon had an opportunity to pitch a show around it.

“We had just been doing shows at the UCB Theater in Chelsea and nobody was coming to see us, and suddenly within six months we had agents, and people wanted to meet with us, and it was exciting,” he says. “So we wrote a TV pitch, we filmed a little four-minute teaser of what we wanted to do, with a bunch of friends at UCB at the time, and then we took it out and pitched it all around town. We played the video right in the room. We would talk about what we wanted to do, and then we would show this little video as an example of how it could work. It was partially because the idea was a little bit confusing to explain—it was like that show American High, except it ends up being more about the filmmakers than the students—and so to explain it took a couple of steps. So we just shot a couple of scenes to show how that would work. And Comedy Central bought it, so we wrote a pilot for them.”

Relate your pitch to their experiences

Another show Mantzoukas and St. Clair performed together, called “We Used to Go Out” received similar attention, and earned the pair another opportunity to pitch a TV show. This one hit so close to home that it both helped and hurt.

“It’s so much easier for people to come and watch your show before you walk into a room because that way they’re excited to talk about the show they saw,” he says. “This show was about a breakup, a whole hour of just this couple breaking up. And it’s really funny, but it’s also really sad and heartbreaking, so every meeting we walked into, all people did was tell us their breakup stories. Like, I was in two meetings where people cried in the meeting. Because something in our show resonated with them, and it made them want to tell us their story. They wanted to relay their similar experiences. One woman we were supposed to have the meeting with was like, ‘I saw your show, I loved it, I called you guys in here for a meeting because, well, I always date guys like [a jerk character in the show] and, well, what is it about people like him that is so captivating?’ She just wanted us to give her, like, therapy on her bad romantic choices, and that was wild. We got to make that pilot too.”

Be aggressive when necessary, and make choices

Auditions are like pitches where the pitching ideas you’re selling is you. As a final example of Jason Mantzoukas’s fearless approach to pitching, this is an account of his experience auditioning for a major role in the 2012 Sacha Baron Cohen movie, The Dictator, which he eventually won.

“In most auditions, you’re just given lines and you’re on tape. Maybe you’re lucky enough to have the people there. But this was a case where they purposefully wanted me to improvise, which I was very happy to do,” he says. “It was with Sacha, and that was intimidating because when I started doing comedy, people would get, like, VHS tapes of the British Ali G Show or his early stuff, and we were just blown away by it. So the idea that I would go in and just audition with him was super intimidating. I knew some of the major people involved, but Sacha was the only real wild card to me. The part was written very passive, which is tough to do much with in that environment. And I knew from talking with those guys that they wanted a strong improviser in the role, so I kind of figured I would show that I was a strong improviser, at the very least. And so I made a choice to make the character much more active and less passive.”

“I kind of ended up going at Sacha more aggressively, just to give us something to do,” Mantzoukas continues. “Just so I wasn’t taking abuse passively. And I could tell instantly that that was the right choice, because the more I pushed at him, he would come back at me twice as hard. Which was fun. And so, for like 20 minutes, we got into it, just going after each other—poking at each other, busting balls, half of it in character, half not. There’s a point in the thing where we’re both still in character but he’s criticizing the fact that I haven’t memorized the pages he’s given me. It starts to get very meta, and be about the audition itself. I felt like he enjoyed improvising with me, so at the very least when I walked out I felt like, I don’t know that I showed them the character they wanted, but I think I showed them I can hold my own improvising, which was important. It felt good.”