The Associated Press Stylebook isn’t just for journalists. For the best in clarity and consistency, corporations should use AP style in nearly all their written communications materials.

The stylebook is updated year-round based on current usage and feedback from an annual survey. Some changes make headlines: in 2014 when AP said that “over” was an acceptable alternative to “more than” when describing relative amounts, the copywriting community was up in arms. In a critical Washington Post op-ed Alexandra Petri claimed the AP was letting usage win over correct grammar with this change.

The 2015 revised book contains over 300 changes, none of which incited the same response as the “over”/”more than” update. Nonetheless, there are five updates that are most important for those who write or edit for business.

A new entry has been added regarding suicides and suicide attempts. Overall, AP recommends avoiding detail on the methods used, with the following style change: “Committed suicide” should be avoided except in direct quote from authorities.

The AP made dozens of minor updates to this category. Most relevant: “BLT”—formerly bacon, lettuce and tomato—is now acceptable on first reference. And “craft brewery” should replace the use of “microbrewery.”

“Favorite” is now an acceptable term for the Twitter button users use to “express approval for a tweet, and/or to bookmark that tweet, and any associated links, for later consumption,” according to the AP Stylebook.

“Favorite” can also be used as a verb, as in: I favorite all the tweets from PR Daily’s Twitter account.

Though social media professionals have used “memes” to increase online interaction with their audiences for a while, it’s now an official AP style term. A “meme” is “a piece of information, such as a cultural practice or idea, that’s shared verbally or transmitted widely, often in social media.”

The AP is also putting the brakes on sports clichés: “A team losing a game is not a “disaster.” Home runs are homers, not “dingers,” “jacks” or “bombs.” A player scored 10 straight points, not 10 “unanswered” points. If a football team scores two touchdowns and the opponent doesn’t come back, say it “never trailed” rather than “never looked back.” In short, avoid hackneyed words and phrases, redundancies and exaggerations.”

Though not a style revision, AP Stylebook has added an 85-page index to its 2015 edition to help users find words more quickly. 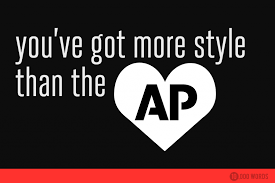